Surrounded by mountains, the village is the modern administrative and tourist capital of Upper Svaneti. It usually stops all visitors, and from here begins most of the routes to the surrounding mountains and communities. Every year new hotels and guest-houses are opened in Mestia, there are shops and cafes, ATMs.

Mestia consists of several ancient villages: Lagami, Lanchvali and Lehtagi. Svaneti its central part of Mestia is called Seti - even in ancient times it was the place of pagan temples.

Thousands-year-old towers have been restored, historical facades of apartment houses have been restored, and the community is slowly turning into a very authentic Svan settlement. Coloritises are added to the snow-capped peaks of the local mountains towering above the tile roofs: Tetnuldi, Laila and Banguriani. State Historical and Ethnographic Museum, in the fund which holds up to 209000 exhibits, including manuscripts, ceiling paintings, archaeological investigations base, fund storage; house-museum. Michael Hergiani;

house-museum of the family Margiani; a museum-reserve in the village of Chadzashi (an open-air museum).

In the Mestia municipality there are 45 fresco churches. In addition, there are 107 churches, 311 Svan towers and more than 100 Svan houses (machebi), which are considered monuments of the Cultural Heritage.

In 48 km from Mestia there is a unique high-mountainous village Ushguli - The height of the community varies between 2100 and 2200 m. With such data, Ushguli is considered the highest population in Europe. In addition to the highest peak of Georgia - Shhara at the foot of which lies Ushguli, there are about 30 medieval Svan towers and almost complete impassability that does not obscure the unreal beauty around. Svan towers are the second most visited tourist attraction in Svaneti. They are inscribed on the UNESCO World Heritage List. The Svan towers are the symbol of Svaneti. Nowhere in the world is there even an analogue of these unique defensive structures of the early Middle Ages. Historically, the appearance of the towers explains the fact of protection from the enemy and the natural elements. Therefore, near each house was built such a tower, which served as a refuge for families in the event of war. Another function of the Svan towers is the warning. They were used as guard posts. At approach of danger, on the main tower fire was lit. As soon as this flame was noticed on the next tower, it also lit a flame. This process was repeated in other posts and, in a few minutes, the whole gorge was ready for military action. 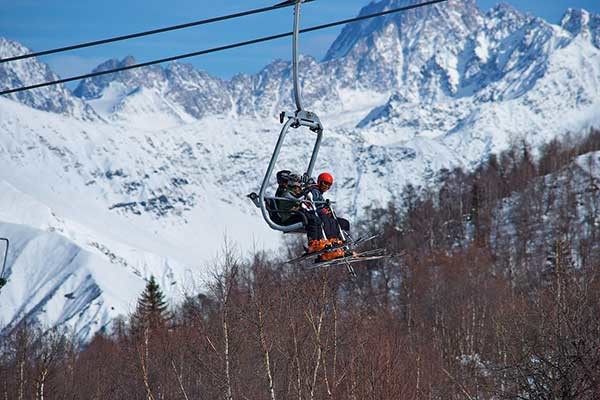 A young ski resort near the city of Mestia, Svaneti is located in the heart of the highest mountainous region of the Caucasus - at an altitude of 1500 meters above sea level.

The ski season in Mestia begins in November and ends thanks to the high-altitude location in early April, and a little later on the mountains of Svaneti attractions due to inaccessibility. Khatswali is a new, developing resort. In the season of 2012, new cableways and Poma tows were installed here, the tracks for night skiing were illuminated, cafe-restaurants on the upper and lower stations of cable cars were equipped. Hatsvali is located 8 km from the center of Mestia, where most of the hotels are located.

If you are still thinking about going to Georgia or not, the answer is clear - yes!